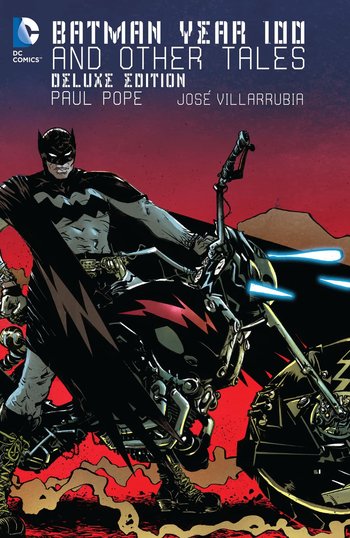 Batman Year 100 is a comic book miniseries by Paul Pope that came out in 2006. It is notable in that the editor for The Best American Comics wanted to include it for the 2008 edition, a rarity for a mainstream Super Hero comic, but DC Comics declined the offer. It is a particular favorite of Batman writer Scott Snyder who has homaged it a couple times in his run on the character.

It is the year 2039 (exactly 100 years after Batman's publication debut in Detective Comics hence the title) and the US is a Cyberpunk land of telepathic government agents and attack dogs with micro-cameras in their eyes. The Federal Police Corps operate with impunity and privacy is a joke. Except there are rumors of an unknown, a ghost running across the rooftops of Gotham. It is the Batman. But how can it be? He'd have to be at least 120 years old! Is this the original guy under the cowl? Is it a clone? A robot? It's up to Commissioner James Gordon, the original's grandson, to uncover the mystery. Meanwhile, Batman and his support team are uncovering a Government Conspiracy covering up the truth behind a murder of one of their own.

The title is a play on Batman: Year One.