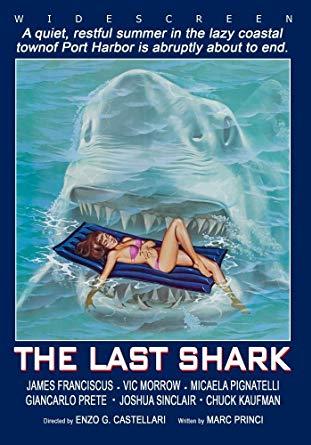 "At the end of the day, The Last Shark gives the impression of Jaws misremembered. It all seems so familiar, and yet not quite right, as if the same events were taking place in an alternate universe."
— Ed Glaser
Advertisement:

It follows a small coastal town where an enormous shark wanders into the marina, eating one of the local teens who is friends with the daughter of the main character, Peter Benton (James Franciscus), and causing him and a trusted friend and shark expert, Ron Hamer (Vic Morrow), to investigate. However, even though the shark hasn't been sighted but is predicted to be the cause of the teen's disappearance, Mayor Wells downplays it so that the town can still hold their windsurfing regata. Naturally, the shark has plans of its own and it's up to Peter and Ron to try and catch it before it eats more of the townsfolk.