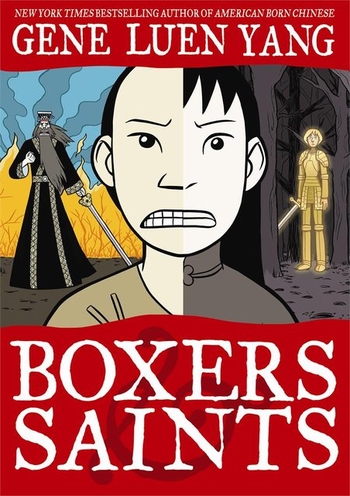 "Two ways to view the world, so similar at times..."
"Support the Ch'ing! Destroy the Foreigner!"
Advertisement:

Boxers stars a young boy named Little Bao, who respects his country's culture and wishes to drive the "foreign devils" from China. It follows him throughout his journey from being a simple boy, to becoming a leader of the Boxer Rebellion.

Saints takes on another perspective, starring Four-Girl, who is a girl from the same village, that joins the foreign devils and converts to Christianity, taking on the name Vibiana.

These two novels tie in together in a lot of places, but they can each be enjoyed individually and by themselves, if you don't care about the subtleties.