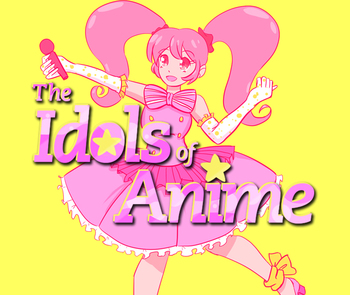 "Welcome to The Idols of Anime, where we talk about every idol anime...EVER!"
Advertisement:

Idols of Anime is a YouTube series by Viga (whom readers may know as Linkara's wife), reviewing Idol Singer anime in roughly chronological order, and talking about the history of the genre. To qualify, the series' main focus must be the idols (which disqualifies shows such as the Macross franchiseWhy? It mostly has mecha aspects, as well as Mermaid Melody Pichi Pichi PitchWhy? Mermaids and love are its main aspects.). Viga also makes a distinction between idol anime and band anime (such as K-On) - the latter do not qualify, either.

Idols of Anime contains examples of the following tropes: