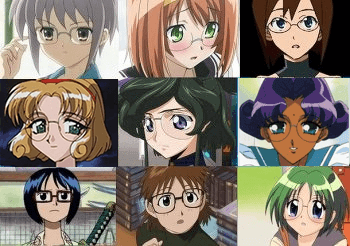 Take your pick, we got these girls in many different flavors!note  From left to right, top to bottom: Yuki, Akane, Kinon, Fuu, Nina, Anthy, Tashigi, Sheska, and Retasu.
"...fanboys make passes at girls who wear glasses."
— Neil Sinclair, alt.fan.bgcrisis, offering his counterpoint to Dorothy Parker.
Advertisement:

When seen through the lens of how attractive others find her, she is cute without going overboard and seems more approachable than a more conventionally beautiful girl. The meganekko

is usually pleasant and clever, and something about the fact that she needs glasses seems to imply an endearing vulnerability that makes her far more accessible to the average guy. After the Yamato Nadeshiko, she is presented as the second-best girl that a boy can bring home to meet his parents and probably the more realistic of the two. Naturally, as with any stereotype, the meganekko can be inverted or subverted, but the vast majority in anime are sweet, smart and relatively independent. Occasionally she is an unpopular character within the story, but not with the fans.

The glasses are the important part, though. Whether she's Blind Without 'Em or not, they are presented as key to her appeal. This is one girl who does not need a "Beautiful All Along" transformation; in fact, taking her glasses away is an almost surefire way to reduce her attractiveness! Keep in mind that not all Meganekko/Megane's are always nerds or geeks of some sort.

Sometimes the presence or absence of glasses shows a change in personality, while other times they are a way to give a character a more realistic costume prop.

In Western countries this type of character is rarely popular; when she appears, she is often commanded that The Glasses Gotta Go!, although the Shrinking Violet or cute nerd sometimes invoke this trope.

Glasses on a Hot Librarian or Sexy Secretary are a completely different thing. The Seemingly-Wholesome '50s Girl may use glasses to pretend to be this trope.

Boys with glasses are called megane, and can occasionally fit into this type (especially in the Yaoi Genre). (Note that boys cannot properly be called "meganekko"; the term refers specifically to girls.) Other possible male types include Stoic Spectacles, Bespectacled Bastard Boyfriend and Four Eyes, Zero Soul.

When glasses result in sex appeal rather than Moe, they have got Sexy Spectacles.

A sub-trope of Charm Point; also compare Speech-Impeded Love Interest, when a speech defect plays the same role in giving an endearing vulnerability to the character.

Not to be confused with MegaTokyo, or Meganeko