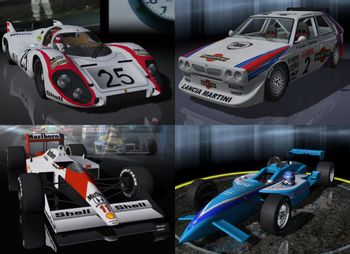 That's quite a garage.

RFactor (Race Factor) is a driving sim by Image Space Inc. (ISI), released in 2005. RFactor was deliberately designed to attract modifications, and was marketed with the tagline 'Customise Control Connect'.

RFactor was released at a time when the PC driving sim market was in limbo after NASCAR Racing 2003 was withdrawn from the market. Despite being a stock car sim, N2003 had become popular for modding many other types of car due to its realistic physics engine. These mods were forcibly halted by N2003's developers, Papyrus, buying the rights to the N2003 code for use on the iRacing program (then in development). Thus, RFactor had a ready audience of online racers and modders willing to shift to the new sim.

In its initial release, RFactor had only five tracks and two classes of vehicle: open wheel formula cars and touring/stock cars. Given the ease of modification, this number has now snowballed to hundreds of cars and tracks, covering most forms of motorsport (and even stretching to boat racing), and the sim can make a claim to be the most diverse driving game available.

The game features examples of these tropes :