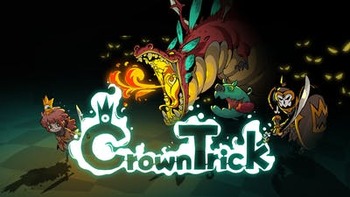 Crown Trick is a Roguelike developed by NExT Studios and published by Team17. It was released for the Nintendo Switch, PlayStation 4, Xbox One, Xbox Series X|S, and PC on October 16th, 2020.
Advertisement:

The world is being ravaged by a devastating plague, with people everywhere falling into an endless slumber, tortured by an eternal nightmare. The land's last line of defense: A girl named Elle, The Chosen One fated to enter the Dreamrealm the plague is coming from to find the source of the Plague of Nightmares and stop it once and for all. By her side is the Crown, an inhabitant of the Dreamrealm who grants Elle the power to fight her way through the nightmares.