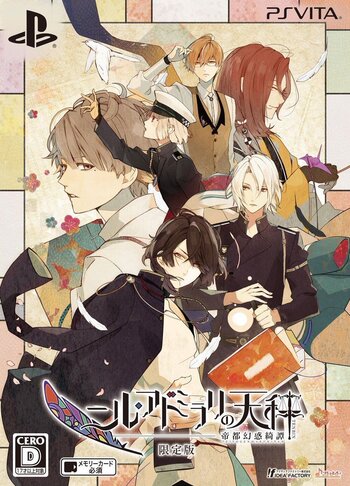 In an alternative version of the Taishou era where it carried on for 25 years instead of 15, Tsugumi Kuze is the eldest daughter of a down-on-its-luck noble family. She has decided to marry a man she doesn't even know to help it keep its status, but just before the wedding, her younger brother Hitaki decides to inmolate himself with an old book in his hands...

His life is spared, but Tsugumi feels guilty about his suicide attempt, and things only get worse when two members of a mysterious investigation squad appears before Tsugumi, calling themselves "Fukurou": an organization tasked with hunting down Cursed Tomes, dangerous books that greatly affect their readers and drive them insane. And Tsugumi has adquired a rather useful ability for hunting down Cursed Tomes: the ability to see their auras as bright lights emanating out of them.

Thus, Tsugumi decides to join the two men's group, leaving her sheltered life by accepting a job as a searcher for cursed tomes. However, darker things lurk behind the surface, and also Tsugumi will become more entangled with her fellow Fukurou members than she may first believe.

Nil Admirari no Tenbin: Teito Genwaku Kitan (Libra of Nil Admirari: Imperial City Illusion) is an Otome Game produced by Idea Factory and Otomate. It was originally released for the Play Station Vita in 2016. A sequel subtitled Kuroyuri En'youtan was released in 2015 exclusively for Vita, and both games were given a Nintendo Switch port in a single cartridge subtitled Irodori Nadeshiko.

An anime adaptation by studio Zero-G aired as part of the Spring 2018 Anime season. It also received a manga adaptation in the GFantasy magazine.