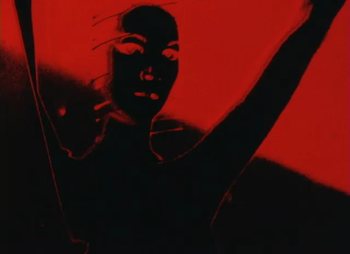 OffOn is a 1968 short film (nine minutes) by Scott Bartlett.

It is an experimental film that consists in its entirety of an audio and visual collage. It starts out with an extreme closeup of a human eye. Spirals swirl and flash across a screen that is artificially tinted in vivid colors. There is a repeated image of a woman making poses similar to a ballet dancer en pointe, with the image split down the middle and reversed. Later there are repeated shots of a woman's mirrored, distored face, as well as abstract shapes resembling inkblots. The whole is accompanied by a sountract consisting of dissonant, atonal buzzing and humming noises.