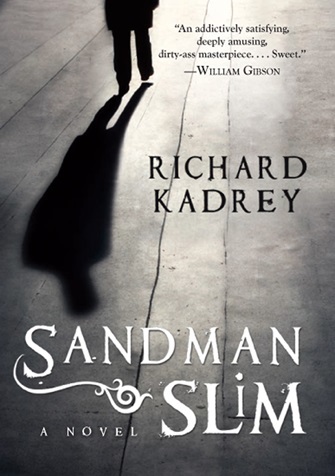 The Sandman Slim series of books by Richard Kadrey are about a man named James William Butler "Sandman Slim" Stark who is a talented magician (not a wizard! Wizards are Harry Potter) living in our world where magic is under the Masquerade. When he trusts the wrong people, the group who he thought were his allies (or at least not asshole enough to pull a stunt like this) sends him on a one-way trip to hell. For eleven years he's forced to participate in gladiatorial events for the entertainment of demons and fallen angels, then recruited as hitman for Azazel. When his girlfriend back on Earth is killed, he steals a key that can take him anywhere in the universe and escapes to the mortal world to hunt the killers down, including their leader Mason Faim and his pet thug Parker.

Basically Stark is Harry Dresden minus any sense of morality and on permanent god-mode. No wait... What's higher than god-mode?

Kill The Dead: Taking place six months after the first book, James kills some vampires, has to find a woman's son, and becomes Lucifer's bodyguard during a filming of his life story. To top that off, he accidentally begins, and consequently has to stop, a Zombie Apocalypse.

Aloha from Hell: Taking place two months after the events in Kill the Dead. After a successful break-in with Vidocq, Stark gets a job to find a possessed nineteen year-old named Hunter, who is addicted to a psychic drug called Akira. As he later finds out, he was the younger brother of T.J., one of the members of Stark's old circle. When he finally finds Hunter, it turns out to he's not possessed by a demon but by Mason himself. Mason tells Stark that he kidnapped Alice, his dead ex-girlfriend, from heaven (thanks to Aelita). He then proceeds to tell Stark that if he wants to save her, he literally has to go back to Hell. After informing the Kissi, Josef, and his fellows about the situation, Stark then crashes his car to get to Hell. (But not before burning down the garden of Eden.) There he breaks into Eleusis to get Alice and a demon general out of Tartarus to fight against Mason. Then he kills Mason in a game of Russian roulette (Stark cheats, of course). This makes Stark the new Lucifer in hell (much to his displeasure).

Devil Said Bang: Taking place three months after the events in the last book. Stark is not enjoying his time ruling Hell the new Lucifer, when three Hellion assassins attack Stark, and are defeated by him. This leads to Stark investigating who is plotting to kill him. He find an 8-ball that is in actuality the Qomrama Om Ya. He then kills one of the main conspirators, then returns to Los Angeles, to see how his friends are doing, only to find himself not being warmly welcomed back. As it turns out Stark's angel-half, now called "Saint James", is accused of killing the mayor's son; and, a ghost is going around killing members of the Sub Rosa. He later meets Cherry Moon as a Jabber (a ghost that haunts its own corpse). Stark learns that the ghost is killing Subb Rosa members called dreamers (that hold reality together by, well... dreaming), while being controlled by Teddy. Teddy had become a ghoul because of a pact his grandfather made with Lucifer and Lula a skinhead and was a member of Josef's group (and was in love with him). Aelita was the reason behind everything and when Stark used the "8-ball" on her she captured it and escaped with it. At the end Mr. Munnin becomes the new Lucifer and reintegrates "Saint James" back into Stark along with the key of thirteen doors.

Kill City Blues: Taking place one month after the events in the last book. After surviving an attempt on his life, Stark chases down the assassin only for him to walk into an oncoming bus. During his investigation he finds out where Aelita hid the Qomrama Om Ya (the "8-ball") in an abandoned run down shopping mall known as Kill City; it's infested by bottom-feeding Sub Rosa families, tribes of Lurkers, and the ghosts of former employees and construction workers that died the day Kill City collapsed. When Stark and crew get there they find the mad ghost that was said to be guarding the "8-ball" in the Roman baths. The mad ghost turns out to be one of the parts that split from God, Nefesh. After he tells Stark where the "8-ball" is, it is taken by Medea Bava of the Inquisition. She then calls Aelita who is then unceremoniously killed off by her with the "8-ball". Medea Bava then reveals her true goal to use the Qomrama Om Ya to summon the Angra. But then Father Traven— a sin-eater— hits her in the back of the head with a piece of concrete then dumps all of the sin he stored up into her; however he dies during the process. Then Stark and crew have to escape a now collapsing Kill City as it slides into the Pacific Ocean.