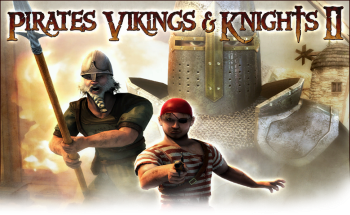 The Combat is focused mostly on a directional melee system, whereby the player can attack four different ways: left, right, overhead or stab. Blocking is also separated into four directions, and if your block direction and timing is right, you get a chance to quickly launch a counterattack. The battlefields range from European castles and countrysides to seaports and pirate havens to snowy landscapes and forests. There are also completely different ones, such as ancient ruins, grand cathedrals, roman arenas, graveyards, deserts and many more. Depending on the map, the teams' objectives may vary from gathering treasure to capturing territory or simply eliminating all enemies.

Pirates, Vikings and Knights II is a class-based multiplayer game. As of now, eleven classes have been completed, with 18 planned in total. On the Pirate Team we have the Skirmisher, The Captain and the Sharpshooter, the Vikings have the Berserker, the Huscarl, the Gestir, and the Bondi, and the Knights go into battle with the Heavy Knight, the Archer, the Man-at-Arms and The Assassin. The classes yet to be released include a Healer class for each team (Pirate 'Ealer, Seidkona and Cleric respectively), a tank for each team (Buccaneer, Jarl and Lord), and a stealth class for the Pirates (Freebooter).

PVKII Gamemodes
At the moment, the game has four gamemodes, but more may be added in the future:
Advertisement:

The rest of the game provides examples of: