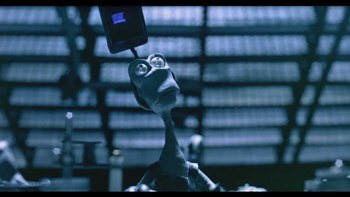 A little stylized humanoid creature (he looks like a taller, skinnier E.T.) works a soul-numbing dead-end job in a factory. Ironically, his job is assembling some sort of colorful pleasure device called "Happy". His only solace is his childhood memories of spilling on a merry-go-round in the park.

One day his tyrant of a boss fires him. The little man is determined to show his boss up. He's a tinkerer, and after he's fired he invents an even better pleasure device called "Bliss". The Bliss device gets him power and riches, but with some surprising consequences.