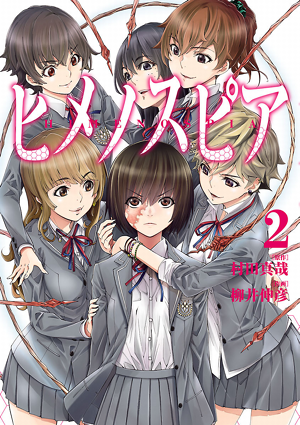 Himenospia is a 2017-2021 seinen manga written by Shinya Murata and illustrated by Yanai Nobuhiko. It was published under the monthly Gekkan Hero's magazine along with his other story, Killing Bites, but following the end of HERO'S in late 2020 both moved to the magazine's website Comiplex.

It follows the misadventures of a young Himeno Endou, who does not have a fun life. She's spent most of her life being treated like garbage by her incestuous stepfather and her abusive mother, her classmates force her to crawl naked around the school and then a wasp stings her in the neck... mutating Himeno and granting her a fearsome stinger tail.

Turns out there's a mysterious species of wasp out there that parasites female humans and turns them into servants. Once a wasp dies, her servants become crazed terrorists hell-bent on ruining society. As Himeno is now one of a few Queen-ranked mutants who can potentially convert an unlimited amount of women, she is soon targeted by the government and all her newfound "comrades" are slaughtered. Infuriated, Himeno must take charge as the herald for the next step in human evolution.

Of note is that the series is largely a reimagining of Murata's Arachnid, which is something that went full circle when a certain someone was later introduced in Blattodea...

This work features the following tropes: