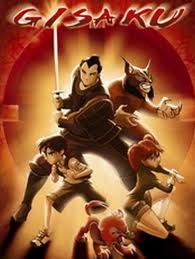 Gisaku is a Spanish animated film about a seventeenth century samurai named Yohei. After defending the world against a demonic army led by the villainous Gorkan, he travels to Spain, where he spends 300 years meditating in a cave. After waking up in the present, he befriends an orphan boy named Riki and discovers that Gorkan is on the move again.