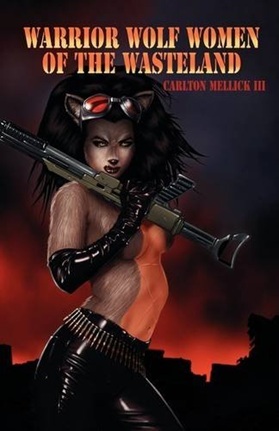 It has been over a century since society as we know it today suddenly collapsed under its own weight. Religion - gone. Modern culture - gone. Cities - gone, except for one solitary refuge of humanity, the kingdom of McDonaldland, where everything is red and yellow (the sacred colors of Ronald McDonald), everybody works at McDonald's (by official decree), everyone eats McDonald's food (all other food, including home-cooked meals, has been outlawed), and a three-hundred-foot-high steel wall separates the last of humanity from the Wasteland outside.
Advertisement:

Nobody goes willingly into the wasteland. Nobody knows much about it, but everybody knows about the wolves - and those who violate the most holy decrees of the Blessed Church of McDonald's, they will be thrown into the Wasteland for the wolves to take - and nobody who suffers this fate has ever been seen again.

Warrior Wolf Women of the Wasteland is Carlton Mellick III's take on post-apocalyptic wasteland movies, his answer to Mad Max 2: The Road Warrior and the like. He swears he didn't mean for it to be a Furry book.

Barbarian Beast Bitches Of The Badlands is the sequel, followed by Pippi Of The Apocalypse.