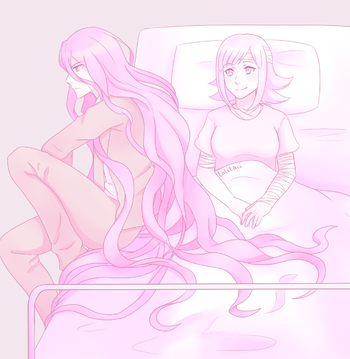 (used with permission)
Izuru knew he couldn't let her die, not like this, not while he had the power to save her. Chiaki survives her execution—but the fate of the world is still sealed. The road to recovery is a hard one, and a reunion is far off.
Advertisement:

by The Apocryphal One is a Danganronpa fanfic, set with the goal of saving Chiaki from her execution in Danganronpa 3—but rather than going full-on AU, it keeps in line with canon, with Chiaki being an off-screen witness to those events.

The fic begins immediately after the Smash to Black in Side:Despair Episode 10. Izuru, moved by emotion, decides to resuscitate Chiaki and hide her from Junko. From there, it chronicles her recovery, Character Development, and reaction to the events around her, such as The End of the World as We Know It.

Extra Life was completed October 5, 2017, one year after release. It can also be found on fanfiction.net here

, where it currently has the most Favorites of any non M-rated Danganronpa fanfic. It also has in-progress Russian

It has a fan-made infomercial

and an in-progress audiobook

After the fic's completion, the author also started a series of vignettes, titled Expansion Pack

), taking place in the same universe that fills in details about backstories and explores what happens after the epilogue. Its trope page is here.

Tropes in Extra Life include:

Even when you mess up and make mistakes…it’s not the end. You can keep going.