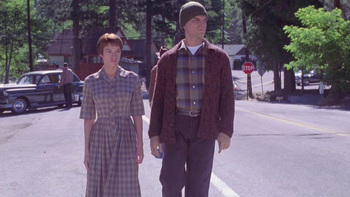 The story of the Vulcans making first contact with humans. "But didn't that happen in Star Trek: First Contact," you ask? Turns out the first time was undercover.
Advertisement:

Archer, Trip, and T'Pol are celebrating her one-year job anniversary despite her not feeling it's worthy of celebration. Archer notes that while he was filling out her crew evaluation, he noticed a document saying that she once took a vacation at a small mining town called Carbon Creek in Pensylvania. When she says she went there for "personal reasons", this piques the curiosity of the two men, so she claims that she was visiting the site of the real First Contact.

In the past (specifically 1957) we see a Vulcan ship surveying Earth after Sputnik is launched, but they crash on Earth near Carbon Creek. Their captain dies, but the rest survive — T'Mir (T'Pol's great-grandma, who is now in charge), Mestral, and Stron. Their transceiver is broken and they have only a weeks' worth of emergency rations, so five days later, they decide to visit the town, disguised as humans by wearing stolen clothes from a clothesline. They enter a bar and Mestral makes some money to buy food by playing pool.

In the present, Trip and Archer laugh at the idea of such an occurrence happening, but T'Pol continues her story, in which the three Vulcans find jobs over the next few weeks — T'Mir at the bar, Stron as a plumber, and Mestral as a miner. He also falls in love with Maggie, the owner of the bar T'Mir now works at, which T'Mir disapproves of. Mestral is interested in the humans, but the other two find them annoying.

After an argument about humans between T'Mir and Mestral, he goes out to a baseball game with Maggie, who reveals that she's divorced, and kisses him. T'Mir, who'd been watching, tells him off and tells him not to keep seeing Maggie, but he refuses. Then, Maggie's son Jack wants to learn about meditation and astronomy from T'Mir.

A mining accident traps twenty people, so Mestral (despite T'Mir and Stron's warnings that this could expose them) decides to save them with a particle weapon. T'Mir eventually decides to help him, and they manage to save them without being exposed.

The Vulcan authorities finally come to pick the three up, and T'Mir sells some Velcro (which, apparently, the Vulcans invented) to pay for Jack's college tuition, then leaves with Stron, but Mestral stays behind to study the humans, with T'Mir lying that he died.

Archer and Trip ask if this really happened, and T'Pol cryptically just says that it's a "story", but she does look over T'Mir's purse in her quarters, suggesting that it was true.