Video Game / The Dark Side Of Red Riding Hood 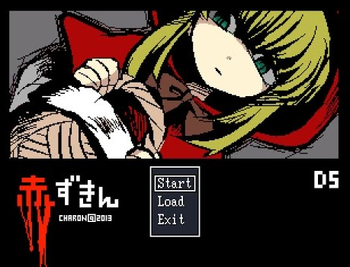 The Dark Side of Red Riding Hood is a 2013 freeware, horror-themed game made by Charon in RPG Maker. It is available here

Little Red Riding Hood, the protagonist, is a young girl. At her mother’s request, she goes to visit her ailing grandmother. But she is told to beware of the wolf. Along the way, she will encounter five detours, and can either stay on the path or decide to explore. What sort of horrible end awaits her? And who is the wolf?

Compare to The Path, which is also based on the Red Riding Hood story, and has a largely similar gameplay premise.

Contrast with Woolfe - The Red Hood Diaries, which also takes a Darker and Edgier approach to the same fairy tale, but moves it in a more action-heavy direction.

Tropes associated with The Dark Side of Red Riding Hood: