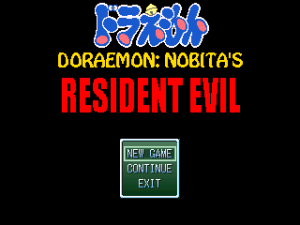 Doraemon: Nobita’s Resident Evil (ドラえもん のび太のBIOHAZARD - Doraemon: Nobita no BIOHAZARD) is an indie survivor horror game created with RPG Maker 2000 by the author named "aaa". It is a parody/crossover of the first Resident Evil game which reenact Raccoon City's Mansion Incident in the context of the famous Japanese Slice of Life anime Doraemon, starring the cast from the latter as the protagonists. The game is very well known for its darker interpretation of the lighthearted Doraemon series, as well as its solid gameplay among the Japanese RPG Maker community as well as the fans of the blue cat robot and his friends. The game has spawned numbers of Japanese-language spinoffs, remakes, and fanworks.

After a holiday on a foreign island, the cast of Doraemon, including the protagonist Nobita Nobi, finds themselves in a living hell when most of the neighborhood have either turned into flesh-eating zombies or been killed by them. After the immerse shock from losing his parents, Nobita runs away from the horde of zombies and takes refuge at the school in which he attends. There, he finds fellow survivors: his best friends Gian, Suneo, Shizuka as well as original characters Seina, Kenji, Toby, and Kaneda. The survivors decide to split up and search the school for an escape route. However, the further they progress, monsters become stronger, and more casualties are made. Nobita finds himself facing the deepest secrets under his own school involving the Umbrella Cooperation, its mutating "Tyrant Virus", and most shockingly, the facts that some of his best friends are not what they seem to be.

The game was not known to westerners when it was first released despite its popularity among Japanese indie gamers. In 2014, A translator Naoya Kiriyama provided the translation for the game, which can be found at his blog

. More information about the game itself and the walkthrough can also be found at his site.

Examples found in the game are as following: