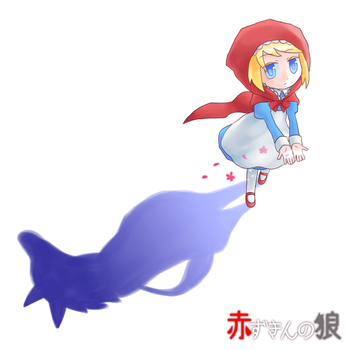 Not everything is what it looks like
Little Red Riding Hood's Wolf (Akazukin no Ookami) is a mystery/horror RPG created by Haneda with Wolf RPG Editor.
Advertisement:

Rosetta was just a shy little girl who lived with her grandmother Mary. However, Mary was murdered by a mysterious person and the killer is scot-free. While looking in the house for clues, she meets a boy named Camille, who wants to pay respects to the deceased Mary. While at first Camille seems to be suspiscious, turns out that while Rosetta is an extremely shy and mild-mannered girl, when feeling threatened, she turns into her Split Personality Ster, who is much more aggressive and direct. Together, they must find the real perpetrator.