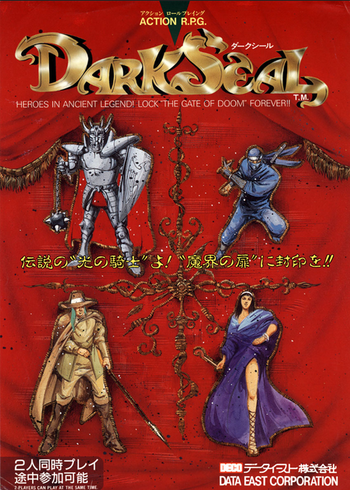 Dark Seal is Data East's duology of action arcade game with role-playing elements. It's inspired by medieval fantasy setting of Dungeons & Dragons, as well as similarly RPG-themed arcade games such as Cadash and Wonder Boy in Monster Land.
Advertisement:

The games are simply known as Dark Seal (1990) and Dark Seal II (1992) in Japan, clearly noting they're in the same series, but the international release renamed them into Gate of Doom and Wizard Fire. In these games, as one of the members of fellowship, you're on epic journey to thwart the plan of evil lord Volov and his army.

Wizard Fire was later included in the Wii compilation Data East Arcade Classics, while Gate of Doom was the first confirmed game to be part of the Johnny Turbo's Arcade series of arcade ports for modern platforms; Wizard Fire later came to the same series. Both games are also available on Steam.