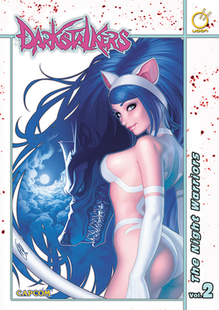 The Darkstalkers comic series were a comic adaptation of the videogame Darkstalkers created by UDON Entertainment, the company behind the Street Fighter comic books. It was written by Ken Siu-Chong and drawn by comic book artist Alvin Lee. Its first issue was published on 2004 and the first six issues were released between that year and 2005.

A sequel called Darkstalkers: The Night Warriors was released on 2011. It consisted about 3 issues that continued the story where it was left. The series was later made part of UDON's Street Fighter comics continuity and continued in the aptly titled Street Fighter vs. Darkstalkers.