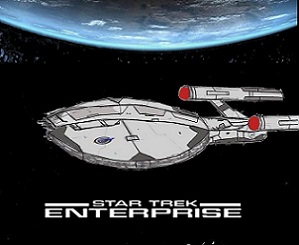 The official poster for the reimagining
Reimagined Enterprise

is a work posted on AlternateHistory.com by BlackWave, also known as the author of Swarm on the Somme and Great Interstellar War. Essentially it is a Continuity Reboot of Star Trek: Enterprise, seeking to address some of the issues fans had with that show by making significant changes, while still producing something recognizably similar rather than just generically 'a prequel to Star Trek'.
Advertisement:

The series is posted in episodic form, but as written prose rather than scripts. It is currently part way through its third season. Most of the episodes are written by BlackWave, but there have been some written by guest writers including Thande, trekchu, William_Dellinger, Cobi Wann, and LordVetinari.

Has a cast page.