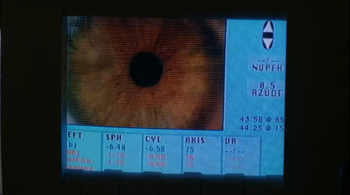 "I - I don’t think she was sure exactly what she was seeing but it was more like a - a constant image in her mind that she learned to live with over time. Up until three weeks ago."
Written by Tim Minear
Directed by Kim Manners
Mulder: Well, there is evidence of some kind of neurological activity which caused her pupils to dilate.
Pennock: From what?
Mulder: To me, it indicates some reaction to stimuli. Some kind physical response to images in her mind's eye.

Mulder and Scully are called to investigate a murder apparently committed by a woman (Lili Taylor) who has been blind since birth.