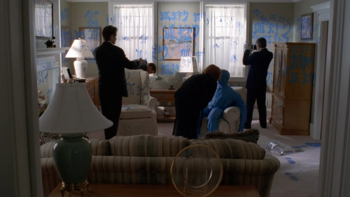 "I'm going to take a wild stab here and guess this is a clue."
Written by Vince Gilligan & Tim Minear
Directed by Daniel Sackheim
Female agent: It's not a manifesto. It's the same single idiogram over and over.
Skinner: Which is what?
Female agent: Well, the hand it's in is pretty sloppy, but I think it's supposed to be "kitsunegari" - "fox hunt".
Scully: Fox Mulder.
Advertisement:

Robert Patrick Modell, the killer with the Compelling Voice from the episode "Pusher", wakes from his coma and breaks out of the prison hospital.