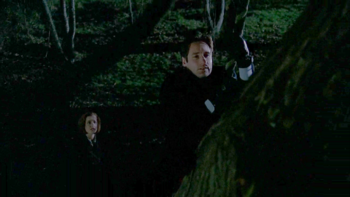 "Hey, Scully, is this demonstration of boyish agility turning you on at all?"
Written by Jessica Scott & Mike Wollaeger
Directed by Ralph Hemecker
Karin: My approach is with the victims solely to allow them to empower themselves.
Mulder: In what ways?
Karin: By breaking the cycle of abuse. By owning it. By confronting it and by standing up against it.
Mulder: Seems to be working.

Mulder and Scully investigate a town where people are being killed by trees.

"Rage, unconfronted, takes its own path."