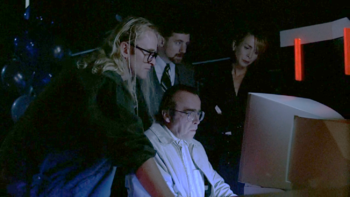 "They want to control every aspect of our lives, from the cradle to the grave."
Written by Vince Gilligan
Directed by Kim Manners
"So, what I'm looking at here is a warehouse break-in with nothing stolen, a shoot-out but no guns, lots of blood but no bodies. And an FBI agent who likes to take off all his clothes and talk about space aliens. Fill me in."
— Detective John Munch

In 1989, a SWAT team raids a Baltimore warehouse and finds Agent Fox Mulder in a box, naked and disoriented. Three men are arrested trying to flee the scene; they are revealed to be John Fitzgerald Byers, Melvin Frohike, and Richard Langly, alias the Lone Gunmen. They argue amongst themselves in the holding cell until Byers is taken to be interrogated by Detective John Munch (Richard Belzer). In a flashback, we learn the story of how the Lone Gunmen began working together and first met Agent Mulder.

Byers, an FCC employee, is attending an electronics convention at which Frohike and Langly are manning different booths, selling stolen cable. A woman passes Byers' booth, attracting his attention; when he pursues her, she introduces herself as Holly and claims that she is in Baltimore trying to get her daughter back from her abusive ex-boyfriend. She persuades Byers to hack into the Department of Defense's computer network, which turns up an encrypted file on Susanne Modeski, whom Holly claims to be her daughter. Mulder passes by Byers' booth shortly afterward; Holly tells Byers that Mulder is her ex-boyfriend. They recruit Frohike to help decrypt the file, and the two men decide instead to simply attack Mulder, but change their minds when he introduces himself as an FBI agent and shows them a photo of Holly, asking if they have seen her.

Byers returns to his booth to see his FCC colleague being wrongfully arrested for hacking into the Defense Department's computer system; Frohike persuades Byers not to turn himself in, and they instead recruit Langly to hack into the FBI's computer system to see why the FBI are after Holly. They learn that Holly is the real Susanne Modeski and is wanted for murder, sabotage, and terrorism at a weapons factory in New Mexico. When they confront her with their discovery, Susanne admits her true identity, but claims she was framed after leaving her job as a research chemist in disgust over government plans to develop a gaseous weapon that induces anxiety and paranoia and is shortly to be tested on civilians in Baltimore. Byers, Frohike, and Langly initially ridicule the idea that the government would knowingly carry out such shady activity, but decrypt the file on her and discover that she is telling the truth, and that the gas is being stored in a Baltimore warehouse.

As the four of them visit the warehouse, Mulder arrives to arrest Susanne, while two other men show up to capture her; they open fire, hitting the gas and triggering an attack of paranoia in Mulder, who strips naked and hides in a box after hallucinating an alien presence. Susanne shoots the attackers and escapes, just as other men arrive, led by Syndicate member X. They quickly clean up the warehouse to remove all trace of the incident while X intimidates Byers, Frohike, and Langly to force their silence. As Byers confronts X over the government's cover-up of the Kennedy assassination (another of Susanne's allegations), X quips, "I heard it was a lone gunman." This becomes the source of the trio's name.

Munch does not believe Byers' story, but Mulder, who has come around from the effects of the gas, confirms it, and the Lone Gunmen are let go. They have a final encounter with Susanne, who has been unable to get the press to believe her story. She urges them to spread the truth about the government's web of deceit for her just as X's men pull up and force her into a car. The trio start by meeting with Mulder to tell him what happened.

"No matter how paranoid you are, you're not paranoid enough."