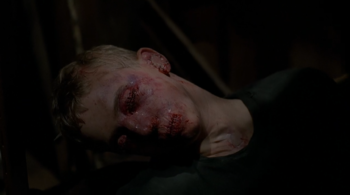 "I'm going to take good care of you."
Written by Chris Carter & Frank Spotnitz
Directed by Kim Manners
Mulder: There's just too much evidence that it's all been a lie. The conspiracy is not to hide the existence of extraterrestrials. It's to make people believe in it so completely that they question nothing.
Werber: So, you and I have just been advocates of insanity all along? Is this the extreme possibility you believe in now?
Mulder: Yeah. Is Patient X any more credible?

Mulder, who has come to doubt that alien abductions are anything but a terrestrial cover-up, meets Cassandra Spender, a multiple abductee, and her son Jeffrey, an FBI agent.

Meanwhile, the Syndicate is having some trouble with the arrival of some very real aliens.