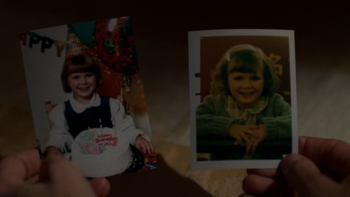 "You can't deny that there is a remarkable resemblance."
Written by Vince Gilligan, John Shiban & Frank Spotnitz
Directed by Peter Markle
"When your father died, it was a long time before he left me. I saw him in my dreams. The phone would ring, and just for a moment I was sure it was his voice. You're doing the same thing with Melissa. You're seeing her in this child, but that doesn't make this child my granddaughter."
— Margaret Scully
Advertisement:

While visiting her brother and his family for Christmas, Scully receives a mysterious phone call that leads her to a girl with a remarkable resemblance to her dead sister Melissa.