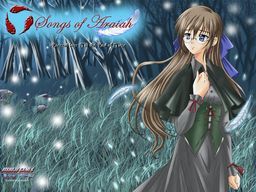 A freeware Kinetic Novel released by Bishojo Games in 2008, Songs of Araiah tells the story of Jason Leraines as he runs away on his 17th birthday in an act of defiance against the Hanasians - the ruling body over the country. He goes to a mansion that is rumored to have a vampire in it that will grant anyone a wish if they let her suck their blood. When Jason meets the vampire, Melissa Vonstrauft, and tells her his wish - to live forever - she sets the price for it at being her servant for the remainder of his life. Given the alternative is a swift death, Jason accepts these terms, and becomes Melissa's servant.

It can be downloaded from here