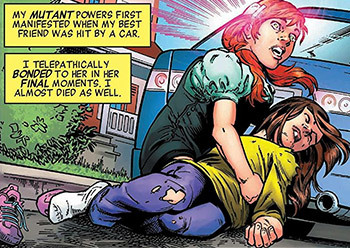 "As Admiral Pike was dying, I joined with his consciousness and experienced what he felt at the moment of his passing: anger, confusion, loneliness... fear."
— Spock, Star Trek Into Darkness
Advertisement:

The moment when a character dies and someone else is there, not just physically (most of the time) with them, but actually inside their minds when the moment comes. The method does not matter: whether through Telepathy, magic, technology or some other means, these two minds have been connected at the moment of death.

What would one feel from another's dying mind? Reflections on their life? Feelings of fear, regret, acceptance, peace? And how would that affect the one who lives? How would they go on after having glimpsed what lies beyond? Often they will be changed dramatically, and may have trouble reconciling what they experienced with life going forward or may gain a new appreciation for life, depending on their outlook and whether or not the experience was traumatic.

May be possible between Mindlink Mates, Mental Fusion, or with a Psychic Link. May overlap with Seeing Through Another's Eyes. Contrast Synchronization, where the link would actually prove fatal to both parties if one dies; and Psychic-Assisted Suicide, where telepathic control is used to force someone to kill themselves. Not to be confused with Foreseeing My Death, which is about glimpsing one's own death in the future.