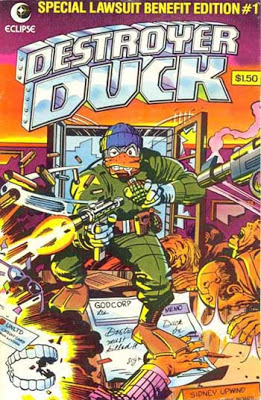 A comic book character who debuted in 1982 and was created by Howard the Duck creator Steve Gerber and industry legend Jack Kirby in order to raise funds for Gerber's lawsuit against Marvel Comics for the rights to Howard.

The series exploits the violent misadventures of Louis "Duke" Duck, an ordinary resident of a world where animals talk and behave like humans. While lamenting with his best and only friend (whose real name is never revealed and is just called "The Little Guy", though it is slightly implied he is Howard the Duck) that his girlfriend left him for a "wimp", Duke witnesseses Little Guy vanish in front of his eyes all of sudden. A few years later, Little Guy appears in Duke's house bleeding to death, much to the horror and anger of his friend. As he dies, Little Guy reveals to Duke that he had been teleported to another dimension, where he was forced to sign in a contract with an entertainment company called Gordcorp in order to survive in this new world, only to be exploited, humiliated and consequently killed when he tried to fight back for his rights. Vowing revenge, Duke creates a dimensional-travelling machine and goes to the world where Godcorp resides, starting a bloody and brutal war against the company and a group of assassins under their command. During his way, Duke also meets a few allies that include the violent-tempered Beryl Mudge and superhuman lawyer Henry Holmes.

Gerber and Kirby worked in the title until issue 05, and after that the series received two final issues written by Buzz Dixon and penciled by Gary Kato, with Gerber as the editor. Much later, Destroyer Duck crossed over with Savage Dragon in a one-shot special that resolved Destroyer's storyline and Gerber's quest to claim the rights to Howard in a very innovative, out-of-the-box way.

It is also noteworthy that Destroyer Duck was the first comic to feature Sergio Aragonés' famous creation Groo the Wanderer.