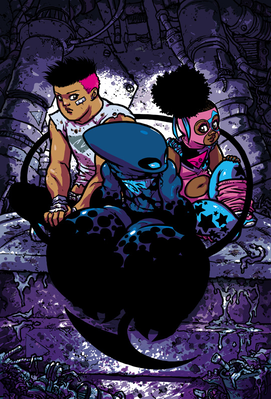 Imagine an idealistic young female vigilante who suddenly has been gifted the physical prowess to clean up the crime-polluted city she's so longed to save. Now imagine trying to do that while juggling a concerned mother, touchy friends, teenage romance, and a criminal landscape that turns out to be bleaker, grittier, and less prone to spandex than your average cape book. This is Scout Montanta's situation and it's never easy. It's never pretty.

There's a running theme of going against gender expectations and conventional sexuality, making the story feel much more fresh and unique than any superhero title in recent memory.

Shadoweyes is by Sophie Campbell, of Wet Moon fame. So far there have been two graphic novels released, with a third announced.