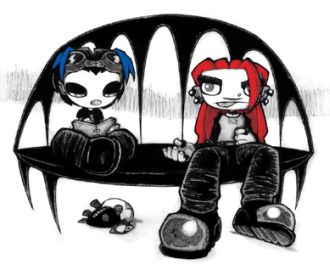 Chuck: Look, there's been a lot of debate-real scientific debate-over whether or not a... creature as powerful as Ms. Rose can even be considered human at all.
Skarsdayle: Is that right?
Chuck: That's right. And y'know what? If she's not human, then the bill of rights does not apply!
Skarsdayle: I'd like to see you enforce that one, Chuckie dear.
Chuck: Well that's a—
Skarsdayle: Now listen here, my pretty little paper waver. I don't know if my friends are "human" or not, and frankly, I couldn't give two Bleeps. But what I do know is this: these "creatures" as you call them... Well they're forces of nature, Chuck. Godzillas in Tokyo. And it's not us gonna tell them what to do. Can't ask the tsunami to mind the lifeguard, now can we?
Advertisement:

A webcomic and print comic about Serenity "Sera" Rose, "the 10th youngest, 8th shortest, 6th 'gothiest,' 22nd most powerful, 38th most respected and 5th most reclusive of the world's 50 known witches." The story is set in Crestfallen, once the home of a coven of witches, later abandoned, and now the "Spookiest Lil' Town in the U.S. of A," and follows Sera as she attempts to live her life and stay out of the public eye.

Made by Aaron Alexovich, who also worked as a character designer on Invader Zim. The complete second volume and starting soon the entirety of the first volume will be available online.