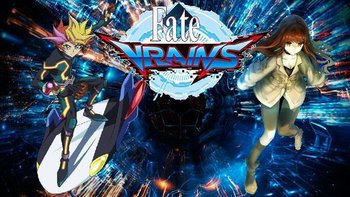 , a Crossover of Fate/EXTRA & Yu-Gi-Oh! VRAINS, created by TheStrangerThatCameFromNowhere

, with duels edited and created by Donjusticia, AKA The Don

Hakuno Kishinami, following her victory against Twice H. Pierceman, finds herself on the verge of being deleted by the Moon Cell. She is an irregularity, and therefore, a program that cannot exist.

A fragment remnant of Twice, however, appears and offers her a means to escape her fate. Granting her the item that crowns her victory, he fades away. Using the Regalia, and her last remaining Command Seal, Hakuno Kishinami escapes deletion, but finds herself stranded in a new world.

Stranger still, she awakens in the body of a different version of her. One that already has a family. Between struggling and coping with the idea that she has taken over the life of another Hakuno Kishinami and a force that covets the Regalia, even in a new world, what Fate will Hakuno create for herself, in a world where one's Fate is decided through a card game?

was published on January 18 2020 and covers the events of Season 1 of Yu-Gi-Oh! VRAINS.

Additionally, "EPILOGUE" also revealed another story currently in the works: Fate/5Ds, which focuses on the male Hakuno Kishinami in the world of Yu-Gi-Oh! 5D's.

These stories contains examples of the following tropes: