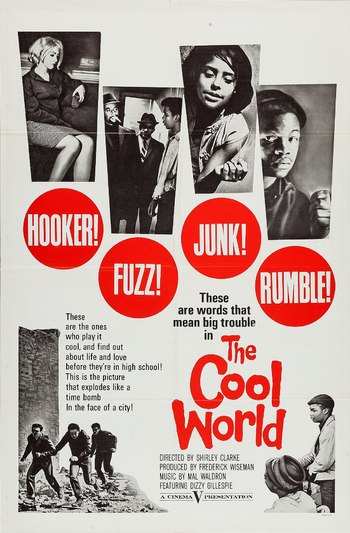 The Cool World is a 1963 film directed by Shirley Clarke.

Duke (his real name is Robert, but only his mom calls him that) is a 15-year-old gangbanger in Harlem. With nothing in the way of prospects, and apparently not going to school, Duke only has one thing in life to give him hope: his gang, the Royal Pythons. It seems that gang violence has been on the wane of late thanks to social workers, but Duke and his gang hope to change that. Specifically, they want to fight their rival gang, the Wolves, seemingly not for any concrete objective but just for the sake of fighting.

Duke decides that what he really needs to be a big man is a gun (a "piece"); with a gun everybody will be scared of him and take him seriously. He approaches an older gangster and Mafia associate, Priest (Carl Lee, who co-wrote the script with Clarke), and asks for a gun, but Priest demands $50. Duke spends much of the movie trying to scrounge up the money. In the meantime, gang leader Blood (Clarence Williams III) brings in a 14-year-old prostitute, Luanne, to basically be the kept woman of the Royal Pythons. Luanne and Duke fall in love. The other Pythons want Duke to take over as leader of the gang, because Blood has a serious heroin problem.

Not to be confused with Ralph Bakshi's animation/live-action hybrid, Cool World.