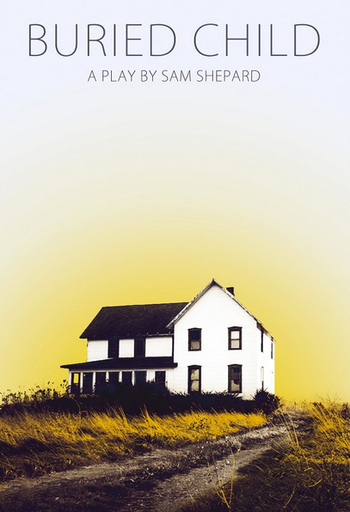 Buried Child by Sam Shepard debuted in 1978 and has been continuously performed and discussed by theatre students and dramaturgs alike ever since. In 1996, a revised edition which only served to further confound directors and actors alike was produced.
Advertisement:

The story begins in a dilapidated farmhouse in Illinois. Dodge is a man is his seventies living out his final hours on a couch. He talks to his wife Halie and harasses his eldest son, Tilden. When Dodge falls asleep, his younger son, Bradley, comes in, hacks off his hair and nicks his scalp. Just when the play couldn't get any stranger, Vince, a young man in his twenties, and his girlfriend Shelly walk in. Vince claims to be Tilden's son, but nobody in the family recognizes him. Frustrated, Vince leaves the house, and Shelly is confronted with the family's darkest secret: Tilden had a baby that went missing years ago.