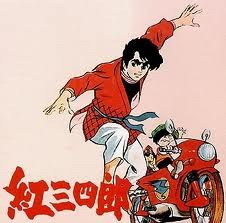 Kurenai Sanshiro (紅三四郎? Kurenai Sanshiro, "Scarlet Sanshiro", also known as Judo Boy) is a Japanese manga and anime television series created by Tatsuo Yoshida and Ippei Kuri. The original manga ran in Shueisha's Shonen Book from 1961 to 1962, whereas a second one ran in both Shonen Sunday (Shogakukan) and Shonen Jump (Shueisha) in 1968 and 1969. The anime series aired on Fuji TV from April 2, 1969 to September 24, 1969, totaling 26 episodes.

The series stars a teenage martial artist named Sanshiro Kurenai, trained in the Kurenai School of Jiujitsu, and centers around his search for his father's killer. Accompanying Sanshiro is an orphaned boy named Kenbo and his pet dog Boke. Sanshiro's only clue to his father's murderer is a glass eye left on the scene of the crime, suggesting that his father's murderer was one-eyed. Thus many of the villains Sanshiro fought during the course of the series were one-eyed or had one eye concealed with an eye-patch...

The opening theme was performed by Mitsuko Horie (her first) when she was just 12 years old.