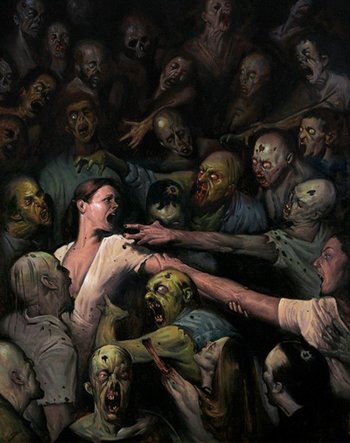 Dead Reign is an RPG tabletop game made by Palladium Books and set in a worldwide Zombie Apocalypse. Things all started with The Wave, a mass sickness that quickly spread across the planet and killed millions of people, who then came back as zombies. No one is sure exactly what caused The Wave, be it germ warfare gone awry, an act of god or even the result of dark magic. No one is sure, but most of humanity doesn't really care at this point. With 99% of the Earth's population now turned into ravenous monsters most of the survivors have only one thing on their mind: survival at any cost. This won't easy by any means, in addition to the legions of zombies that have taken over the planet are various death cults, bandits, raiders and even zombie worshipers that make life in the post-apocalyptic world even more hellish than it was to begin with. Still, what is left of humanity won't go down without a fight, that's for sure. The question is, do YOU have what it takes to survive in a world ruled by death?

This tabletop game provides examples of: