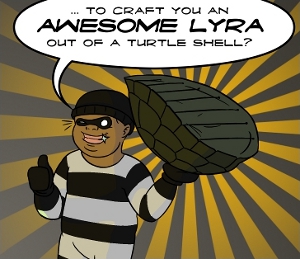 Hermes, bargaining his way out of trouble.
"I hereby create Zeus and Sons! Leaders in world administration!"
— Zeus, upon seizing control of Mount Olympus

Aeons ago, the old gods emerged from the primordial chaos, order was created, and Cronos ruled the world, gobbling his children. And then came Zeus, who dethroned him. Except Cronos is a rapper guy with a clock medallion, and Zeus turns the dwelling of the Gods into a large office managing all of Greece. The story switches between the main action, retelling known Greek legends with a modern twist and the Muses commenting on the events like... well, you know.

The comic used to be located on this

site, which, unfortunately, no longer seems to exist. Fortunately, however, much of the comic seems to have been saved by the Wayback Machine, with most of the saved pages dating back to a surprisingly thorough crawl of the website that happened around October 2012, not long after the comic became Orphaned.

The comic contains some sexual themes and strong language.