Also known as The Ocean Collective 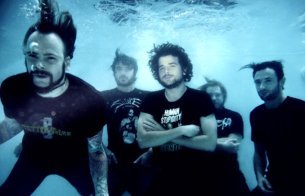 The Ocean (commonly referred to as The Ocean Collective) is a band formed by guitarist Robin Staps in 2000 in Berlin, Germany. While the group has always had a very firm grounding in Progressive Sludge metal, the sound has been shown to be fairly varied since inception. This is due in no small part to the wide variety of members that have been part of the band. According to The Website

over fifty people have been participants in The Ocean, so many that it's impossible to know exactly who has been involved. This has brought a range of sound into The Ocean, from post-metal to symphonic to hardcore. Robin Staps has consistently been the only member involved since the beginning, and has orchestrated members and performers from the beginning. This has allowed him to bring in relatively well-known vocalists in from Converge and Cave-In. This is why the band has been referred to more as a "collective" in the past, where various artists would record and tour with Staps, but not become permanent members. In 2009, Staps brought in a more stable line-up, cementing the band to function more as a group than a project by one person.

As one might guess from the name that oceanography is a theme. The Ocean shows up in most of the artwork and aesthetics of the band (just see the page image!). It shows up in many of the lyrics, and has even been the subject of an entire concept album. It figures, since Robin Staps has an interest in oceanography and likes scuba diving. Lyrics have deviated to other things, including philosophy, globalization of mankind, and two records entirely criticizing both Catholic and Protestant dogma.

Notable past members include Luc Hess, Louis Jucker and Jonathan Nido. Listing every past member would take far too long.

"A world with God would be even more disturbing than a universe without him
For if He tolerates atrocities
If he condones such cruelty
Who would want to worship such a maker anyway?"
Roots & Locusts