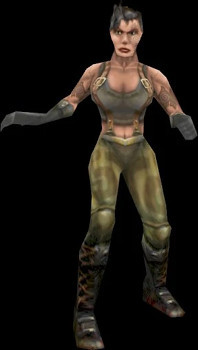 Gina, one of the many faces the Player Character can take.
The Featureless Protagonist of Unreal and Return to Na Pali. A prisoner aboard the Unified Military Services' Vortex Rikers, the ship crashed on the planet Na Pali. What followed to that particular event was a quest for survival that took them across the planet and other crashed ships in order to find a way out of the planet. 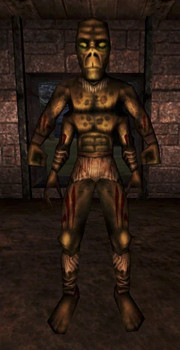 "Habouji!"
Native citizens of the planet Na Pali. They are a peaceful agriculture-based race of four-armed humanoid aliens. One fateful day, the Skaarj found the planet, and proceeded to invade and subjugate them, turning them into their slaves. They never lost the hope that a savior would come to rescue them even during the darkest of times. Then the Vortex Rikers prison ship crash landed into the planet.

In the game, they help the Player Character by revealing hidden weapon/item caches as a form of "thank you" upon saving them. 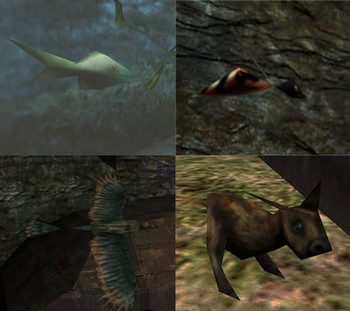 Clockwise from top-left: Biterfish, Horsefly, Nali Rabbit and Nali Bird. Not pictured: the Nali Cow.
Different animals comprising the fauna and flora of Na Pali. Not all of them are associated with the Skaarj or other malicious races. 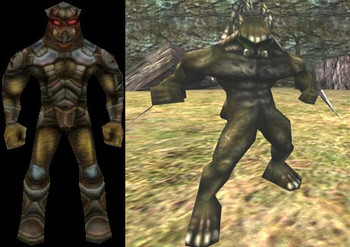 A Skaarj Trooper and a Skaarj Warrior
The main antagonist alien race of the Unreal series, as well as the most prominent enemies the player finds in Na Pali. Comes in several races. 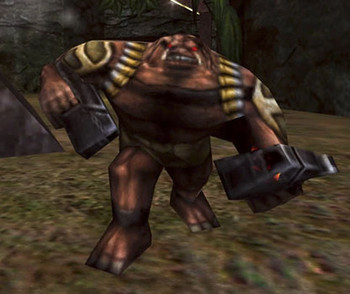 Pictured: Lesser Brute. Not pictured: Regular Brute and Behemoth.
Big, slow-moving ape-like creatures with dual-wielded mini-rocket launchers. Comes in three varieties: Lesser Brutes, Brutes and Behemoths.
Gasbag
A floating, belching creature.
Krall
A warrior race of vaguely reptilian creatures with staves that shoot energy balls, enslaved by the Skaarj. Comes in two classes: regular and Elite.
Manta
A flying enemy found in Na Pali, attacks with its tail.
Mercenaries
A group of hazmat-suit clad aliens stationed at the Terraniux ship. They are archenemies of the Skaarj, and are competing with them for control of Na Pali.
Pupae 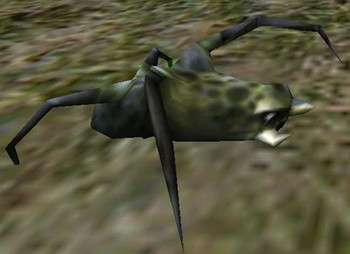 The larval form of a Skaarj. They're weak, their leap attack isn't damaging, but they usually attack in packs.
Slith
Tentacle
A creature that likes to hang out of ceilings and shoot spikes towards its enemies.
Titan
The hugest non-boss enemy of Unreal and Return to Na Pali, these beasts attack by throwing rocks and shaking the ground with their stomp.
Predators
Spinners
A giant arachnid creature that is capable of lobbing acid at it's foes.
Spoiler mook

Stone Titan
A bigger Titan sitting on a throne in the "Velora Pass" level.
Giant Gasbag
A larger, stronger and more powerful Gasbag with the ability of creating smaller Gasbags. Fought at the "Nali Castle" level.
Skaarj Warlord
A hulking leathery-winged demon thing that is apparently in charge of Skaarj operations, armed with a deadly Rocket Launcher. First fought in the "Demonlord's Lair" level, implied to be the General of the Skaarj forces. Also guards the Skaarj Mothership Generator. This boss is also fought in Return to Na Pali in the "Escape from Na Pali" level.
Spoiler Bosses

A bunch of large, psychotic Skaarj with glowing "pseudoinvisibility" effects, the player finds them as experiment subjects in the "Mothership Core" level. After blowing up the Skaarj Generator and cutting the power across the ship, these Skaarj go berserk. Fought in the level "The Darkening".
Spoiler Final Boss

The Final Boss. A six-armed monster who can shoot bolts, use a shield, and Teleport Spam. Fought at the level "The Source".
Giant Manta
A bunch of oversized, bulky Mantas. Found in the levels Glathriel Village, Part 1 and/or Glathriel Village, Part 2.
Giant Skaarj
An unusually large, 15 foot tall Skaarj Lord with double the normal amount of health as a surprise boss at the end of the "Bounds of Foundry" level in Return to Na Pali.