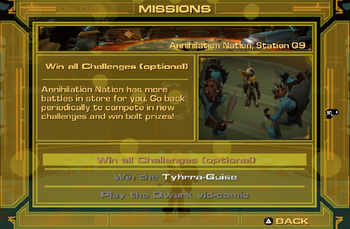 A staple of many Role Playing Games. This subquest, which is usually an optional Side Quest, but sometimes a part of the main quest, requires you to fight in some sort of gladiatorial combat.

If done as a sidequest, expect rules to make this more difficult than standard combat. For example, you might be limited in your choice of gear, or the fight might include only One party member at a time, or some types of attacks (say magic for example) may be forbidden. It might also be the home of the Bonus Boss and where the Infinity +1 Sword is found. Such restrictions are rarer if this is part of the main story line.

Alternatively, it is possible that the player may only need to perform in a few ranks of the subquest to advance the main quest, the rest of the competition is optional.

Main Story examples are usually Inevitable Tournaments, as you are likely to hear of the fight long before you actually have to take part in it.