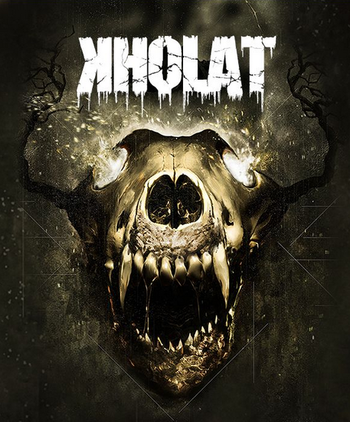 Kholat is an indie horror game by Polish developers IMGN.PRO, released in 2015 for PC, with PS4 and Xbox One ports following in 2016 and 2017. The game is in first person, following the player as they attempt to discover what happened to nine students that went missing on a Russian mountain, by tracing their steps and trying to find notes and pages that they left. However, all is not exactly as it seems.
Advertisement:

The game is very similar to Slender in that you play as a Featureless Protagonist in the wilderness, trying to find pages while a supernatural force hounds them. However, it is different enough to stand on its own merits despite the obvious influences. The game's primary gameplay challenge comes from the fact that the player's position is not marked on the map, requiring usage of landmarks, the compass, and a good sense of direction in general to find your way throughout the mountain. This focus on navigation and exploration as a key element of gameplay also gives the game some similarities to Miasmata.

The story is based on the Dyatlov Pass incident

, in which nine hikers were discovered dead under mysterious circumstances on the Kholat Syakhl mountain in Russia, from which the game derives its name.

Stars Sean Bean as the narrator.