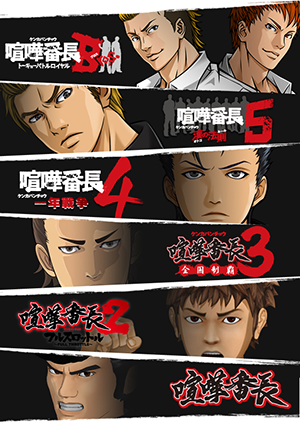 KENKA (喧嘩): 1) Fighting, wheter through physical or vocabular prowess. 2) 1-on-1 fights are incredibly manly.
BANCHO (番長): The strongest person in a school or group. One who leads through power and intimidation. Some banchos are respectable and care for the peons.
— "Bancho 101", Kenka Bancho: Badass Rumble
Advertisement:

A series of free-roaming beat-em-up games published by Spike Chunsoft for the PS2 and PSP, where you play a delinquent Japanese high school student looking to become a powerful banchō, or "ringleader". To that end, you run around beating people up, make friends and defeat enemies, learn new fighting techniques, try to date girls, and maybe buy nice-looking clothes.

The third game in the series, for the PSP, was released in English by Atlus in 2009 under the title Kenka Bancho: Badass Rumble.