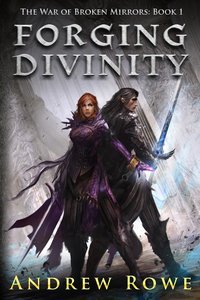 An Epic Fantasy novel by Obsidian Entertainment game designer Andrew Rowe, Forging Divinity focuses on a group of heroes attempting to establish the authenticity of a comparatively new group of gods. It's the first book in the War Of Broken Mirrors series.