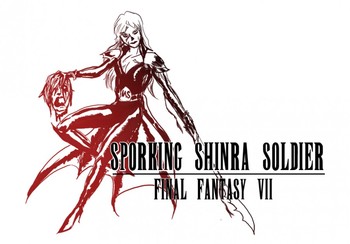 Cover art of Shinra SOLDIER created by a sporker
Advertisement:

Sephiroth is one of the most popular Final Fantasy villains of all time. He's an elite soldier, has a tragic story, and he's very, very pretty. But what was his life like before the game began? Before he met Cloud and Zack? The aptly named Sephirothslave sets out to tell us.

Between the ages of 14 and 18 (2002-2006), Sephirothslave wrote her two stories Shinra High and Shinra SOLDIER, boasting a total of 169 chapters (170 including the epilogue) of meandering plot lines. What starts off seeming as a typical High School AU turns out to be her attempt to write the history before the story began.

Julia Nakahamou, a blonde and busty martial arts prodigy, is a recent transfer student to Shinra High. On her first day, she encounters most of the crew of Final Fantasy VII, but more importantly, she encounters Sephiroth and falls instantly in love with him. Unfortunately for her, Sephiroth ends up in a relationship with Laura. On top of this, Julia catches the attention of the science teacher Hojo who wants her as part of his new project to build a breed of Mako-enhanced Super Soldiers. Julia and Sephiroth must sort out their feelings for each other while surviving Hojo's deadly experiments.

Shinra High doesn't so much end as roll directly into its sequel, Shinra SOLDIER. Julia, Sephiroth, and the others have survived Hojo's training and are now rushed into military training to ideally become the new SOLDIER class heroes that Midgar desperately needs. Sephiroth and Julia exceed expectations, quickly ousting General Heidegger and becoming the new General and Commander of the Shinra armies. They then lead Shinra to its rise to power, effortlessly crushing all opposition in the most ruthless ways possible.

However, Hojo still has plans for our couple. He has begun injecting Sephiroth with JenovaCells, allowing Jenova to possess Sephiroth's body and try to kill Julia. Ultimately, Hojo succeeds in poisoning and murdering Julia, ending the story right as Sephiroth heads for Nibelheim, and the beginning of the actual game's plot.

The fiction is well known for several reasons. In addition to its length, convoluted plot and the blatant perfectionist qualities of Julia, it is a mouthpiece for the Jenova Possession Theory, which claims that Sephiroth was not the true villain of the series, but rather an innocent victim, being controlled and or commanded by Jenova. In addition to this, Sephirothslave claims that the character of Sephiroth was inspired by her archangel husband, who supposedly looks like him and shares his name. Finally, it is famous for butchering nearly every character in Final Fantasy VII, and getting nearly every aspect of the story wrong.

Sephirothslave returned to the series to attempt to rewrite it, but gave up after only making superficial changes to the first nine chapters. A sequel to Shinra SOLDIER, Silent Melody, was also abandoned after four chapters.

Conpare My Inner Life. A sporking of it in its entirety, as well as many other fanfics and essays of Sephirothslave, can be found here