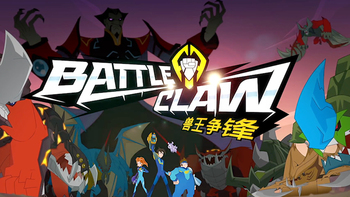 Hope you're good at crane games...
Battleclaw is the story of a boy named Tyee(Pronounced "Tie-yee") who aspires to Be The Very Best at the eponymous Battleclaw, a sport that involves catching colorful creatures called Jinlins using an Energy Grappler and then Combining them into one, dual-attribute monster who then does battle with other Battleclaw players.

After his uncle reneges on his promise to let him join his own team, Tyee winds up with a Ragtag Bunch of Misfits called Team Gogo after pulling a Legendary Battleclaw from a stone.

Tyee had better hone his skills, because the Battleclaw of the Ancient Fire Lord Mo Yan recently fell into the hands of his uncle, and the Ghost of Mo-Yan demands the power of the Jinlins in order to regain his former power! It's up to Tyee and the rest of Team Gogo to stop Mo Yan from returning to life!

The entire series is officially available to watch on Youtube here