Jerma985, despite being primarily being a voice commentary channel by one man

, is developing a wide cast of characters, primarily through Jerma Rumbles. For a more comprehensive look at the cast of the Jermaverse, the Jerma Wiki 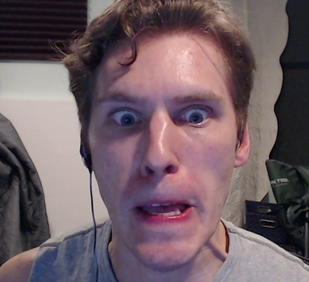 The creator and star of the channel from Boston, Massachusetts. He is also both the commentator and a contestant in the Jerma Rumble Wrestling League as two different people. He started out with Team Fortress 2 commentaries (favourite classes are the Engineer and the Spy), but made strange, hilariously bad Indie Steam games his primary channel focus before shifting to a full-time Twitch streamer with a vague plot arc and a highlights channel that serves as his main Youtube channel since 2016, 2ndJerma.

This folder is for characters who have made their debut in videos before the Jerma Rumbles.

Jerma's Grandfather who lives with him. Used to do tutorials on First Person shooters like Call of Duty: Modern Warefare, on Machinama Respawn, and now is a recurring character on the Jerma channel.

Jerma's childhood best friend, has shown up in person to a few videos but is mostly referenced.

A strange fixture of Jerma's channel since a subscriber milestone video, who hasn't appeared again until being a part of every Jerma Rumble.

A species originally seen in Grand Theft Auto 4, they are giant, fat, surly, slob-like and strange. There are apparently thousands of them.

A pirate who exists in Battlefield 4 and Assassin's Creed Black Flag.

The classic video game character, but with a different interpretation than usual.

The "Monopoly Guy" from Spy Party

In the game Spy Party, while playing with STAR_, the meta of the game evolves around selecting the character Jerma dubs "The Monopoly Guy" every time, and the opponent instantly shooting him in the head for being the obvious, and most funny, choice.

"The Lord of All Hells and Demons and Hatred". Originally took over Jerma's show to play Five Nights at Freddy's, and shows up in Jerma Rumble 3.

Frank Pizza of the Boston Celtics

A player on the Boston Celtics basketball team in 1997, and fellow player of Gabe "The Glue Man" Degrossi.

A notorious thief from Jerma's masterpiece Rat Movie: Mystery of the Mayan Treasure. For his appearances in the Rat Movie series, see here.

In Rat Movie: Mystery of the Mayan Treasure, the Giant Rat makes all of the rules for his rat followers. Him and his rat allies attempted to steal the Mayan Treasure, succeeding right until the Cat Police apprehend him. The Giant Rat has also appeared in Jerma Rumble 3 and the Live Action Rumble. For his appearances in the Rat Movie series, see here.

Spies from Team Fortress 2, reimagined as a species who hatch from eggs. Baby Shpees are Spies before they learn how to backstab, disguise, go invisible, or do anything useful for their team. Actually noobs given a baby-voice by Jerma.

A Superhero character who made he debut in Grand Theft Auto 5 Online videos, he teaches the audience how to be sneaky, although what he does isn't very sneaky, and usually amounts to walking in traffic.

A friend of MLG Grandpa's, who has appeared in Grandpa's Christmas Album and an MLG Grandpa instructional video for Modern Warfare 3.

A character Jerma invented, who is an angry school principal. He debuted in a Team Fortress 2 Demoman Tip video in 2012, appeared in Grandpa's Christmas Album later that year, before disappearing completely.

Jerma's most famous pet in Monster Hunter, named for resembling a bean bag form of Sonic and constantly dabbing.

An Otomatone that Jerma bought that was introduced when he streamed Celeste.

The numerous residents of the modded Sims 4 streams, where Jerma specifically modded the game to let it kill people in a wide variety of ways.

Easily Jerma's shittiest character yet, Bugleberry is an old man (in fact a rubber mask with a voice changer) who likes to read TERRIFYING stories to Jerma's audience.

The mastermind of traps himself, sort of.
other Commentators and collaborators

Jerma Rumble Contestants
These characters may appear in other videos, but these are the characters who made their debut on the Youtube channel in the Jerma Rumbles.

The creator of Team Fortress 2 and CEO of Valve, and is the only character other than Jerma to compete in every single Jerma Rumble fighting event.

The BLU Spy (from Team Fortress 2)

One of Jerma's favourite Team Fortress 2 classes, on the offensive team. Now a recurring character in Jerma Rumble.

A bat who is also a boy, and the first "shitty character" to enter The Jerma Rumbles.

The eponymous main character of the Sonic series.

One of the Founding Fathers and the 6th President of the United States.

The 44th President of the United States.

Formerly the greatest basketball player of all time, Gabe Degrossi was able to not only hurl the ball from the other side of the court and land it in the net, but train the rest of his team to do so perfectly.

However, Gabe suffered a horrific lab accident, which granted him "glue powers" at the cost of his basketball prowess. He later joined the Jerma Wrestling Foundation, where he earned the moniker of "Shittiest Character."

The main character of the Half-Life series.

A character who resembles a milkman from the 1930s.

The real Super Mario, through and through. Probably not a Byeah in a costume.

The folklore figure and symbol of Easter.

The 8th President of the United States.

The RED Heavy from (from Team Fortress 2)

A wild Russian man who is a powerful defense class in TF2.

A boxer who puts extra care into improving his upper body's physique.

The mascot of the classic Cap'n Crunch breakfast cereal.

Jolly ol' Saint Nick... or maybe he's not so jolly after all.

The King of Rock and Roll himself.

A mysterious avian wrestler who resembles The Chicken.

A character who is not affiliated with or related to the Teenage Mutant Ninja Turtles in any way.

The mascot of a previously popular cereal brand which has since been discontinued and restricted to being seen on Halloween. Included after Captain Crunch's stunning win in Jerma Rumble 2.

A strange mutated man that has a big smiley face for a head from the abstract fighting game Lethal League.

That one weird guy who appeared in commercials for Slim Jims (and not Randy Savage).

An odd Mickey Mouse lookalike who's much more cranky.

A pencil-shaped wrestler that originated from "Your neighborhood classroom". He participated in the third Jerma Rumble as the fifteenth competitor, where he survived the rumble long enough until only him and Gabe Newell were left. When Gabe Newell overpowered him and gave what appeared to be a devastating blow to The Pencil, he fakes a leg injury so he could blindside Gabe and eliminate him, which he succeeded in doing so. While his actions were controversial, his fake injury was still technically legal, and he was crowned the winner of the third Jerma Rumble. For reasons unknown, he has yet to make a reappearance in the future Jerma Rumble events.

The mascot of Cocoa Puffs cereal for a while.

The mascot of Frosted Flakes cereal.

A disco-goer dressed in little but a diaper.

The hero of the game Castle Griffinsteed. Debuted in the arena in Live-Action Jerma Rumble, but has his own short film.

A member of the audience who was *ahem* lucky enough to join the Rumble.

A medic who joined the Rumble when they were short wrestlers.

The hyper-intelligent gorilla who's part of Overwatch.

A pair of men in a horse costume.

A wrestler who is dressed like a spruce tree and adorned with ornaments.

The resurrected MLG Grandpa, back from hell to wreak havoc with his new demonic powers.

A shadowy assassin and thief from Sorcery!

The hero of the Sorcery! series.

A famous American actor, known best for his work in Citizen Kane by most, but many Jerma fans can recognize him from his exceptional work advertising Paul Masson champagne.

A real-world wrestler who Jerma fans recognize as his donation sound effect on Twitch.

A moon with arms and legs and Jerma's face printed on it.

The inventor of baking powder and founder of an eponymous line of baking goods.

Archmage of Mampang (from Sorcery!)

The creator of the Seven Serpents from Sorcery!

A character from Sorcery!

A guy wearing a VR headset.

The main character of the Hitman series.

A man of diminutive stature coated in slick slime. Described by Jerma as "A melted action figure."

A feline enemy from Sorcery!

A summoned goblin companion from Sorcery!

A Founding Father and the 4th President of the United States.

A random, evidently very powerful character created by one of Jerma's friends, his true identity, purpose, and name being a complete mystery.

The dangerous sniper assassin of Talon.

A seemingly unstoppable contestant that appeared halfway into the 2018 Rumble. He quickly proved himself to be nigh-unstoppable and the single most dangerous villain in the Jermaverse.