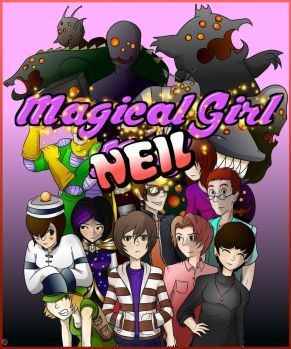 It's the story of a magical girl who sincerely hates HIS life
Advertisement:

Neil Moynihan is not the Ordinary High-School Student he appears to be. Thanks to a Secret Legacy from his Japanese immigrant mother Noriko, Neil transforms into an Oni-fighting Magical Girl Warrior. It turns out he's the latest generation in a long line descended from the original magical girl, a Shinto priestess who was granted Magical Girl powers to protect her village, and neither the oni nor those powers particularly care that Noriko's only child is not a girl. Needless to say Neil is not especially thrilled by this, especially since he's a bit of a misanthrope. He doesn't even like people, why would he want to save them?

Underscoring Neil's unconventional nature his primary power consists of his ability to headbutt monsters into submission. If that doesn't work he can summon a variety of household appliances which he uses as bludgeons or projectiles as the situation requires. He's also not to particularly thrilled by his transformation sequence, which seems determined to modify (as in girlify) his costume in different ways to suit each battleground, like a bathing suit for the beach. Throw in an irritating Stealth Mentor and an even more annoying Mentor Mascot and Neil's life pretty much sucks. Fortunately, he's got a solid support system in his parents, his best friend and a passel of girl cousins looking out for him.

is a webcomic by Satelite Nine that usually updated weekly. The last update was in December 2017 and in April 2018 the author announced that the comic would go on indefinite hiatus citing personal growth as a writer and illustrator in the five-year life of the work and a desire to work on other projects. They did however state their intent to return to the comic at an unspecified future date.

A full mirror of the comic exists here